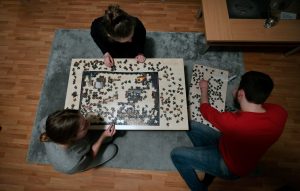 Jigsaw puzzles have always been something people used to play to pass the time.But they have become increasingly popular during the pandemic as a favourite pastime in these troubled times. They have become so popular that bookshops have had a hard time keeping them in the stock. There is a global puzzle shortage in this time says Brian W, the co owner of the PuzzleWarehouse online retailer. Most of the factories in the world are far behind schedule by at least a few months he says.

That is also confirmed by Matthew Goin, who was looking to buy puzzles for his 3 children a few years ago and could not find one that looked similar to his family(he is African American). Because of this lack of racial diversity in the puzzles that were on sale he and his wife started an online Company called Puzzle huddle. They say the most popular puzzle is that showing a Black Girl doing an experiement in the chemistry set.