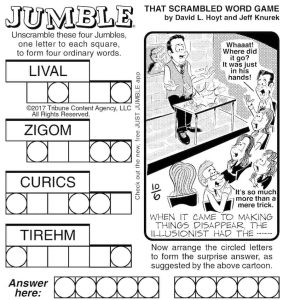 When was it born?

This is a classic type of Jumble Puzzle. The type of game with a cartoon that you see everyday on your local newspaper. The jumble has been around for over 60 years as it was created in 1954 by Martin Naydel. A person who was known for his work on comic books. Its initial name was Scramble but later was changed. It has changed its rights a few times and its variations are found in many newspapers as the game is syndicated in more than 500 newspapers worldwide.

If there is any of you who doesn’t know what a Jumble Puzzle is we’ll give you a short introduction.
It is the most popular word puzzle in the world and the way it works is that you have letters that you unscramble to make words. And you have a punny or homophone answer and the Cartoon of the puzzle, serves as a clue to the answer. You as a solver need to reconstruct the word and arrange letters in the correct position to spell the answer or the phase correctly.

Book version of the Jumble puzzle have been published periodically. They include Jumbles for Kids, Sport Jumble Books, Jumble Anniversary Books, Another Called Jumble Jubilee, or Jamboree (which is a humorous themed one) as well as collection of many puzzles like Jumbo Jumble (which has more than 500 puzzles).

A game show version of the famous Jumble Puzzle also aired in Television there actually were two game shows.
One in United States(hosted by Wink Martindale)

Check the video below if you’re curious:

and another in England (It aired just one year between 1991 and 1992 and it was hosted by Jeff Stevenson).

A video of the British Show can be seen below: